So, the inker has done his or her job, and now we have black and white images—usually with some halftone rendering, like feathering, hatching, stippling, drybrush, maybe even spatter technique. And even possibly with some Zip-a-Tone or other halftone applique, creating gray or grayish areas.

At this point, the colorist controls everything but the black and grayed areas. They’re there. The colorist can choose to leave a white area white or choose to fill it with any color. In ancient days, there were only 56-58 usable colors. There were three color plates—yellow, magenta and cyan. You could have no color in an area, 25% or 50% halftone of each color, or solid colors. That works out to 64 theoretically possible colors, trust me. But some weren’t really usable because the ink saturation would have been too heavy for the cheap newsprint paper. Show-through is bad enough, soak-through is disastrous.

(JayJay here. Here is a well-used ancient color chart that was printed up by the color separators for us colorists to go by.) 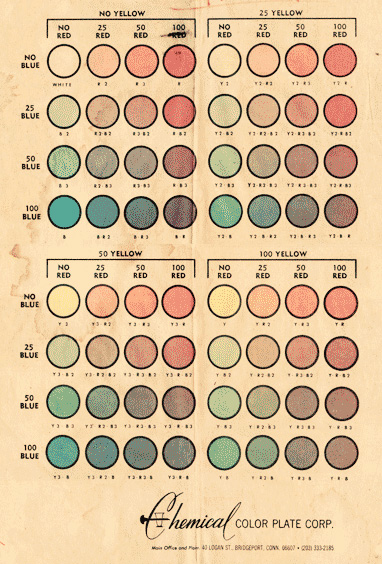 Let’s talk about the ancient days for a minute. The technology has improved, there is much more a colorist can do now, but many of the old principles still apply, or are instructive.

If you look at ancient comics, I’m talking Golden Age through the early 1980’s—and especially the earlier ones, when, in my opinion, more colorists had a clue—you’ll notice certain patterns.

Ever notice that to this day, heroes tend to be dressed in primary colors? Red, blue, yellow? Villains tend to be wearing secondaries. Orange, green, purple. Civilians tended to be wearing other dark colors—Prussian blue, magenta, brown, blue-green….

No it wasn’t done every single time in every single book in every single instance. Sometimes a new person screwed up. Sometimes an experienced person dared to try variations. A pink dress on a woman. But check it out, don’t you see a lot of primaries heroes and secondaries villains? I’m not talking through my hat, here. This is what I was taught in the 1960’s.

In modern times, the coloring is done like a painting, usually on a computer—some still use real paint and brushes—but either way, there are unlimited colors at the colorist’s disposal.  But still, the same underlying principle applies. THE JOB IS TO CREATE DEPTH, THE KEY TO CLARITY.

No rules. In these advanced times, you don’t have to do pastel backgrounds and characters’ colors according to formulae. But, still, you should be trying to create depth. Clarity.

The colorist has more tools to use than the inker does. He or she can create depth progressions with all the properties of color—hue, intensity and value, and of course, playing with plane-by-plane contrasts of same.

Marie Severin, wonderful, lovely genius artist, colorist, creator, used to teach the use of “hot” and “cold” colors to bring objects forward or push them back. Yes. Great. You can guess the hot and cold colors.

Create the illusion of depth any which way you can.

The same progressions of value that work for inkers work for colorists. Value is the colorist’s most powerful tool, too.

If you’re ever looking at a panel inked by one of the greats—Williamson, Woody, Giordano, whomever—and you wonder why they haven’t engineered the illusion of depth as well as they might have, I’ll guarantee you, it was one of two reasons. Either they were obliged to follow the indications of a penciler who hadn’t thought it through, OR THEY WERE IMAGINING THE PANEL IN COLOR, seeing it their minds’ eyes in color. Thinking about how Marie would exploit the darks, textures, tones and lights. Or Tatjana Wood, or George Roussos, or Glynis Oliver, or Klaus Janson, or Max Scheele, or JayJay Jackson.

Think about the Alex Ross books you’ve seen. Ever had any trouble “reading” a single panel?

I had a guy named Dan Green working for me at Marvel. Inking the X-Men. I tried to explain using value to create the illusion of depth. No good. He kept bringing in stuff that looked like a Rorschach test. Great body of technique, brilliant hands, total control of the tools like you couldn’t believe. But I think he’d heard editors and artists say, “You must spot your blacks” too many times and I couldn’t get him to believe that wasn’t the goal at Marvel, that I really wanted depth and clarity. I kept saying, “Dan depth, depth, depth.” He’d look at me like I was crazy.  And he’d bring in these elegantly crafted Rorschach tests.  Finally, one time, he showed me a painting he’d done. Who knew he painted? It was great. Miles and miles of depth, brilliant use of value (and every other tool at his command). I said, “Dan, what you’re doing on the painting, do with the ink.” He says, “Oh, so THAT’S what you want!” [laughter] After that, he got it. Brilliant artist.

He was used to editors and other people who didn’t know what they were doing telling him stuff because it sounded good to say, he just didn’t register what I’d been saying. He’d heard so many people say, “Well, you have to spot your blacks. You have to make an attractive abstract pattern with your blacks”—even really good people, who you’d think were unquestionable!—that this superb artist assumed what they were saying was what the peculiar little comic book business required.

Next thing you know he’s bringing in inking done the way he painted, with depth and clarity. I suspect his training and instincts would have led him to always do so if he hadn’t been given bad intel.

Comics used to be colored using Dr. P.H. Martin’s water color dyes. They’re made to match printer’s ink, to more accurately represent what the printed book should look like. In ancient days, the coloring wasn’t used directly. The colorist prepared “color guides” used to show what was intended to hand separators. They did the actual coloring. They filled in areas on transparencies of the art with gloppy red paint—one transparency for 25% yellow, one for 50% yellow, one for solid yellow, same for magenta (red) and cyan (blue). Nine in all. They looked at the color guides and guessed which combination was called for in each little space—Hawkeye’s boot, for instance. They didn’t always have to guess. Some colorists who knew the codes marked the codes on the guides. Y2 was 25% yellow. Y3 was 50% yellow. Y was solid yellow. Get it? So Y2R2B2 was 25% of each color. (Was that “Payne’s gray?”  Somebody help me out here.)

That was in ancient days. Now, it’s almost all computers.

Here are some examples of good coloring, or because these are modern times, good painting. I’m still waiting for Marvel to sue me for using a Captain America story to illustrate good storytelling….

(ASIDE:  Neither I nor my company ever made a penny from these lectures. When we charged admission, usually five or ten dollars, every penny went to charity—the Comic Book Legal Defense Fund and/or Make-a-Wish. We never even deducted expenses, we covered all that.)

…and I’m fearless, or nuts, so here are images I borrowed from a book called Dinotopia

, I know the people and they were kind enough to let me use them. So far. They’re great. They show you the principles of creating the illusion of depth through coloring better than any I’ve ever seen.

Just look at them. You don’t need me to say anything. 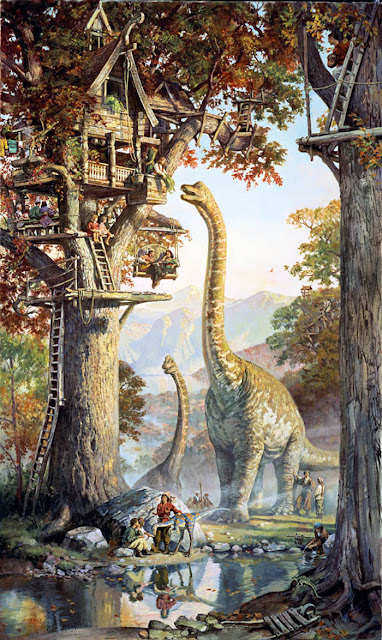 Separate planes, try to create an illusion of depth. No matter what you do it’s a flat surface. There’s no real depth there. You’ve got to create the illusion of depth. I’ve shown you the tools, the things you can use. If you succeed in creating depth, the image becomes clearer, it tells a story more clearly. Serve the story.

The point is we’re not cameras. We need not be rigidly literal. We’re trying to tell a story.

I’ve heard people say, “Well, but that wall would really be a certain color, and it doesn’t work with your depth thing.” Yeah? Well, look at the wall here. It is a certain color, it has been painted a certain color. But look at where the light is hitting it and where it’s less well lit.  Same wall, same paint, what’s the difference? Light. You’ve got more light hitting it here so it looks lighter, you got less light hitting it there so it looks darker. Fine, then you’ve got a 30 percent differential, and you’re still honest. You got 30 percent artistic license.

One more thing. Look at night scenes in comics today, and generally the idiot—I didn’t say that. I retract that. Anyway, okay, the charming colorist will color everything dark, because it’s night.

Have these people never seen a movie? Any trouble seeing clearly what’s going on in a night scene in a Cameron film? Any problems or confusion in T2? See everything okay?

By the way, the scene with Cap breaking the crooks out of jail was a night scene. Any trouble reading it?

By the authority vested in me, I grant you all an artistic license. Tell the story.

And, colorists, buy Dinotopia, read it, live with it, learn from it.

P.S. Two words of advice that will tremendously improve your coloring—WHITE SPACE! Leave lots of white space. Use white as a color. A lot. Do it. You’ll thank me later. WHITE SPACE!

Dinotopia: The World Beneath 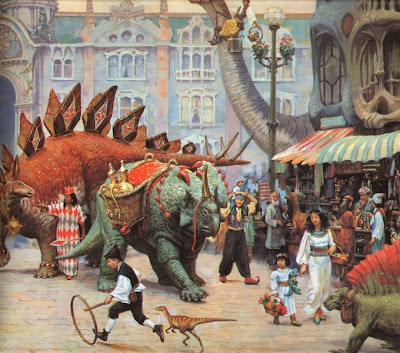 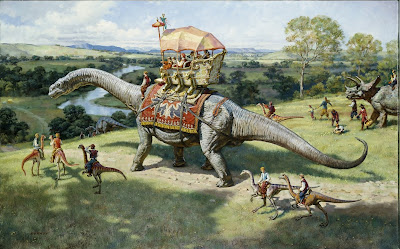