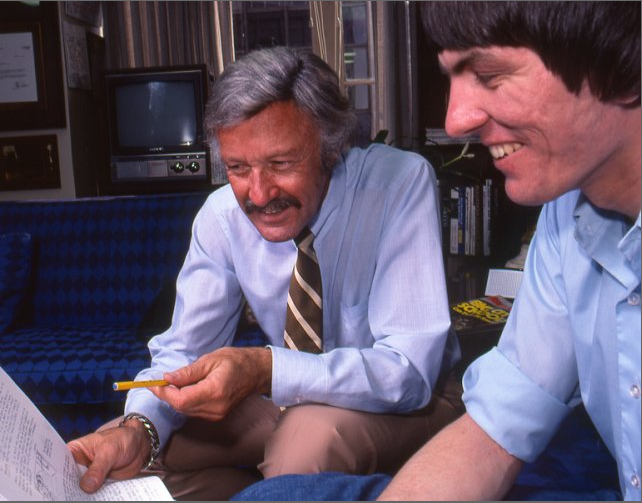 As editor-in-chief of Marvel I found myself with a lot of talented people around me who needed basic training. What I started doing was working with them and trying to explain some fundamental things. So I developed a series of lectures. The lectures were designed not to teach style, not to how to make comics Jim Shooter’s way. Just fundamentals that I learned from the masters, passing on the wisdom of the ancients. Most of it was taught to me by experts.

The comics business went into a steep decline in the ’50s and early ’60s. During that time a lot of companies folded, a lot of comic book professionals were unemployed, and so, if you were an editor at a surviving comic book company you never had to train anybody, you knew lots of guys who were out of work. The streets were awash with unemployed cartoonists. So what happened is we had a generation gap—relatively few new people came into this business between the mid-’50s and the early-to-mid-’60s.

Around that time a few of us started to trickle in. Among the arrivals in the early to mid-‘60’s were E. Nelson Bridwell, Roy Thomas, Archie Goodwin, Neal Adams, a few others and me. We were pretty much the last guys who got to learn our craft from the older guys–the guys who really invented and built the comic book business.

Among that group, I have kind of a unique history. Most of the others went on to be writers or artists, a couple of them became editors. But most of them went on to follow one discipline. I ended up not only getting into editorial and management, but starting a company (or three)–I had to learn everything. I was an owner, a publisher, I had to learn every creative discipline, I had to learn production, manufacturing, marketing, promotion, advertising; and I had to learn enough Management 101, math and GAAP to understand the business of the business. I took legal seminars to better understand intellectual property law. So I had kind of a unique point of view. It doesn’t mean I know everything. It just means that I know some things that few of the others had to bother with.

The bottom line is that I was taught a lot by a number of old pros at DC and by Stan, with whom I worked very closely for the first few years at Marvel, on the Spider-Man syndicated strip as well as the comics.

When I arrived as editor-in-chief of Marvel in 1978 I found out that a lot of people who’d come up after me had not had the benefit of working with the older guys. Either they had no training or they’d been trained by a guy who arrived there 10 minutes before they did.

There was a GENERATION GAP in the comic book industry. There were some people in their 50’s and 60’s, there were a lot of people in their twenties and early 30’s, but not enough in between. Because there had been an extended period of decline when relatively few new people came in, we were missing a generation.

What that meant is that young guys who should have been assistant editors to a forty-something person were instead editors or editors in chief, even though their main qualification was having read 10,000 comics.

I was among the younger guys, but, by virtue of the fact that I’d started at age 13, working with ancient ones – for instance, Sheldon Moldoff, who began drawing comics in the ‘30’s drew my first published story – I had old-guy sensibilities. I often related better to the old guys – Romita, Perlin, John Buscema, Frank Thorne, Win Mortimer, Carmine, Paul Newman, Russ Heath, Stan, Jack, Steve – you can probably fill in the list yourself – than I did the young turks, some of whom had to be reminded which end of the brush to use.

So as editor-in-chief of Marvel I found myself with a lot of talented people around me who needed basic training. What I started doing was working with them and trying to explain some fundamental things. A lot of these guys were brilliant talents. They just hadn’t gone through boot camp like I had. So I developed a series of lectures which I started giving as editor-in-chief of Marvel Comics. The lectures were designed not to teach style, not to how to make comics Jim Shooter’s way. Just fundamentals. Little tidbits that I learned from the masters, passing on the wisdom of the ancients. Most of it was taught to me by experts.

It’s hard to find a guy who worked at Marvel in the ’70s or ’80s who hasn’t heard my famous “$1.98 storytelling lecture.” Ask some of them. Or ask Chris Claremont if he’s ever heard my “Little Miss Muffet” lecture.

I think because of my unique history, because I was trained by the ancient ones, who pounded story structure and comics craft into my head, it is incumbent upon me to pass along some of this stuff so that it isn’t lost.

And one last thing – I didn’t stop learning things when I was 18.  All along the way I learned from everyone I dealt with.  I learned from Roy, Archie, Neal, Romita, John Buscema, Gil, Vinnie, Giacoia, Veerporten, Roussos, Walt, Louise, Larry Hama, Giraud, many more.  I also learned a few things from some of the young turks, once they figured out that they should use the pointy end of the pencil – Miller, Sienkiewicz, Golden, Lapham; and from some writer-only types like Stern, DeMatteis, Waid and more, including many non-comics writers. Someday, I’ll do my Hall-of-Fame lists….